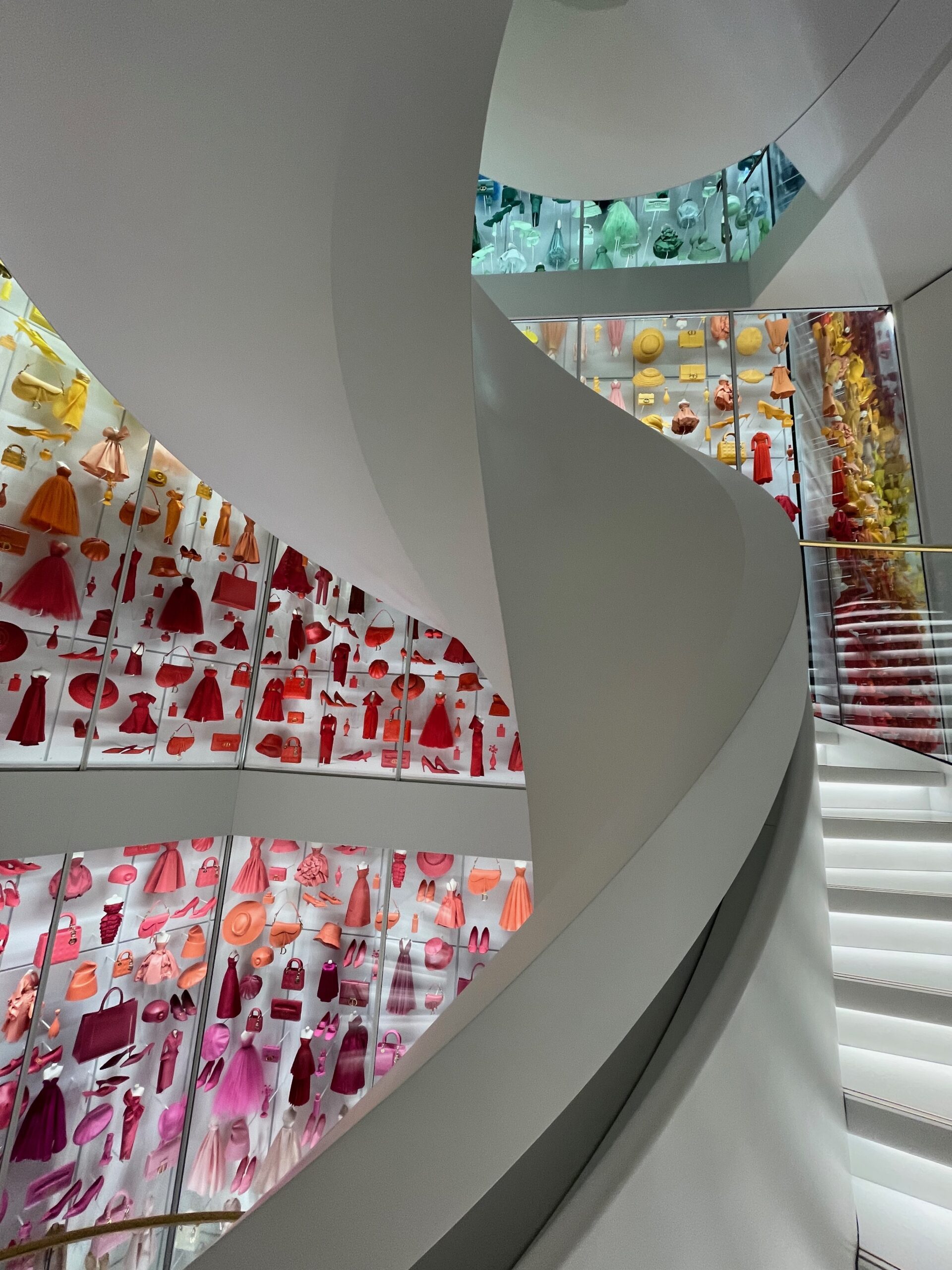 Paris is known to have a long tradition of fashion. In fact, French reputation as a capital of fashion dates back to times of “the Sun King” Louis XIV who strongly believed that luxury and stylish clothing reflects not only the economical strength of the country but also demonstrates the prestige and power of the monarchy. It’s less known that until Louis XIV’s reign, the capital of fashion was Madrid. The love of art, theatre and lavish performances by young French King, propelled the ornamental, colourful and voluminous garments worn by the King (who also liked to perform on stage) as well as the courtiers and various artists brought to Versailles to give entertainment to the monarch and his notables. The vivid splendour of the clothes in French court pushed away austere fashion worn in Spain, and gave beginning to haute couture as we know it today – seasonal, experimental and media driven. In fact, Lous XIV with his golden curls, sophisticated clothes with his signature high-heels red shoes oozed the formidable authority of Anna Wintour with charisma and confidence of a supermodel.

Even if fashion blossomed in France since 17th century, the term haute couture was used for the first time in 1908. The whole sector was in deep crisis during the two World Wars and properly revive from the war austerity in 1947 with Christian Dior’s New Look Collection in 1947.

If you’re interested in fashion La Galerie Dior in Paris is definitely worth visiting. Located on the 11 Rue François 1er close to Avenue Montaigne the exhibition show the Dior house legacy, for more than 70 years. In the Gallery you can experience the visionary audacity of Christian Dior and his six successors: Yves Saint Laurent, Marc Bohan, Gianfranco Ferré,, Raf Simons and Maria Grazia Chiuri.

“Fashion designers offer one of the last refuges of the marvelous. They are, in a way, the masters of dreams...” – Christian Dior.

The success of Christian Dior house came with an iconic New Look Collection in 1947 which was a revolutionary event in the history of fashion. The Dior silhouette embodied the attitude of a woman confident in her femininity, radiant and aware of her powers which was so refreshing in the post-war reconstruction. Such an image of a contemporary woman enhanced by Dior drawn affluent guests and friends of Christian Dior to Avenue Montaigne. High-profile clients travelled from near and far to discover the dreamy world of marvel created by this French Maison.

La Galerie Dior given an opportunity to experience the spirit of Parisian Haute Couture displaying looks from previous collections, sketches and archived documents as well as accessories and particular objects many of which never exhibited before.

So is it worth visiting La Galerie Dior?

If you’re interested or work in fashion industry then it’s definitely a must visit. You will learn about the beginnings of the brand, life and inspirations of Christian Dior and see many pieces of clothes and accessories from different collections over 70 years. There is also many photographs, documents and artefacts displayed so you can see how the house was (is) functioning. However, the exhibition is relatively small and if your visit is short and you’re not particularly keen on fashion, then you can skip it without much regrets. In my opinion, Paris is discovered best when visited few times and approached from many perspectives. It’s worth planning one visit with a French fashion theme and then visit Dior Gallery within such journey. French haute couture is notable part of the country’s legacy and is a part of  French cultural heritage. Even if when thinking about high fashion in France, to our mind comes brands such as Dior, Chanel, Louis Vuitton to name just a few, the fashion tradition dates back to reign of Louis XIV who made it illegal to be unfashionable in his beloved Château de Versailles.

The tickets to the gallery sell quickly so make sure you book them online at least one week in advance. You can do it on their official website (click). The exhibition is closed on Tuesdays. In case you won’t secure your ticket online, on the day of the visit you can queue to get the limited numbers of tickets without reservation. The queue however is long, and only few visitors are joined each time slot to the group who have booked their entrance. Thus, the reservation is really recommended if you don’t want to loose a lot of time waiting. Plan around 2 hours for a visit without much rush. At the end of the exhibition there is a cafeteria where you can get some refreshments. However, there is no museum shop where you could purchase some souvenirs from your visit.