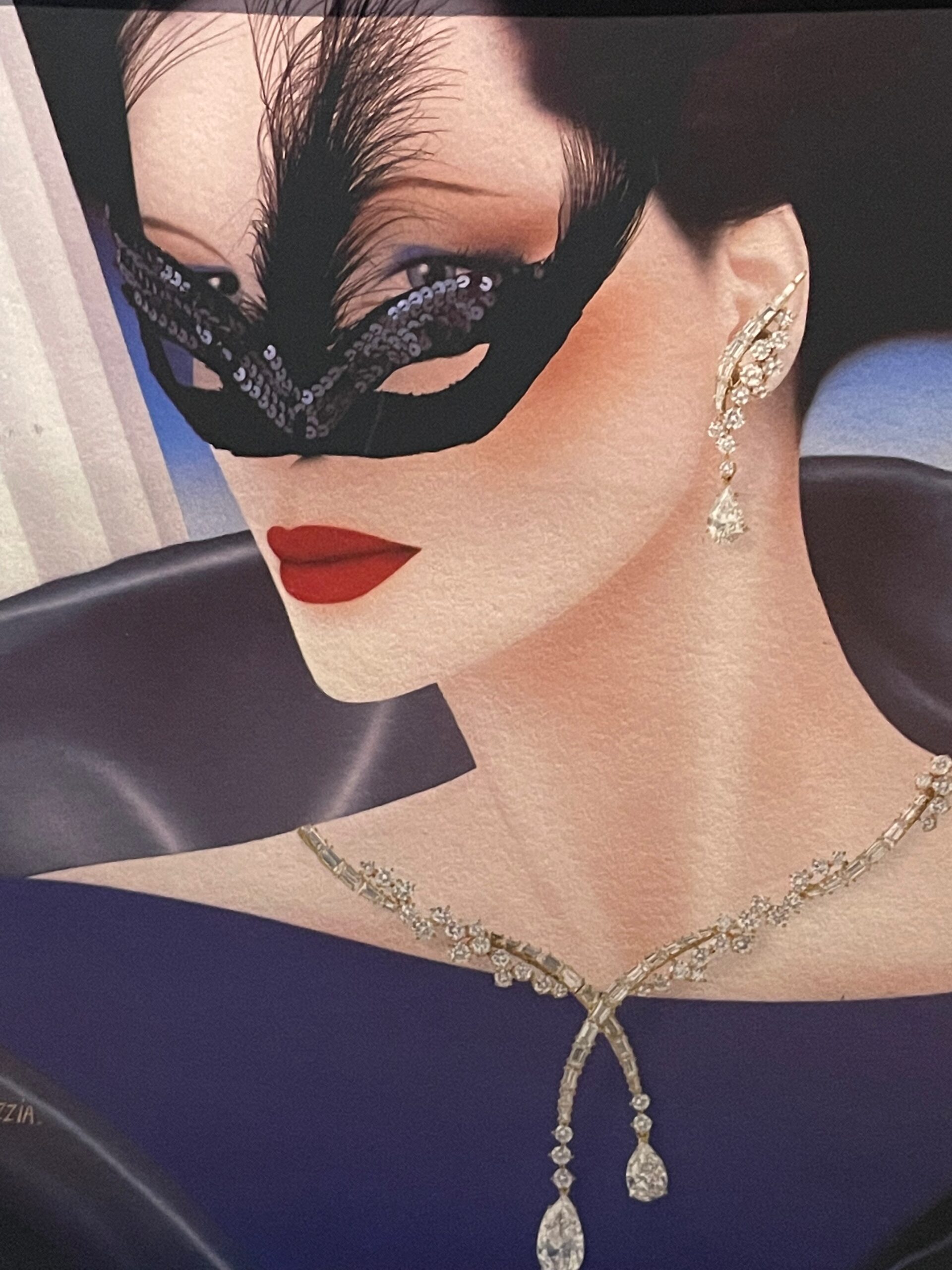 This autumn Palais the Tokyo in Paris hosts the exhibition about the heritage of jeweller creator Fred who began his adventure with precious stone in 1936. The exhibition can be viewed in Paris from 28th of September to 24th of October 2022.

The history of Maison Fred starts from Fred Samuel who created the brand. Born in Argentina in 1908, he moved with his family to Paris in 1920. He married Therese Halphen in January 1934 and had with her two sons Henri and Jean Samuel who later joined the family business. Fulfilled patriarch with a happy family life, he was also a bold entrepreneur who launched his first jewelry collection just at the age of 28 in 1936. On his first business card he introduced himself as “Modern Jeweller Creator”, words which define very well his vision and designs of jewelry pieces produced by his Maison.

The exhibition starts with a display of famous Soleil d’Or, the spectacular 105.54 carat yellow diamond discovered by Fred Samuel in 1977 in the United States. The stone’s color and brilliance reminded Fred about his childhood in Argentina and its golden twilights he observed there as a small boy. The title of the stone was given by Samuel’s son Henri and recalls Argentinian nature and landscapes, Soleil d’Or means in English the Golden Sun.

The Soleil d’Or is an exceptional piece in the family business. It is the first coloured diamond that marked the history of Fred. The unusual discovery, the flight on famous Concorde plane, the arrival to Paris and it’s display at Maxim’s are part of the heritage of the brand.

The world of colors

The colors and light are playing the crucial role in Maison Fred designs. Fred Samuel was very inspired by the Argentinian landscapes, the childhood in South America influenced his designs during all his career. During all the years he observed attentively the nature, bringing out the colors to his projects when dealing with exceptional gems, semi-precious or hard stones with colors being always the key to his creations.

This fascination by the treasures of nature is clearly visible in the fabulous jewelry pieces displayed in Palais de Tokyo, you will find there mesmerizing compositions of immaculately white pearls, deep blue sapphires, soft aquamarine or tantalizing redness of rubies.

Love to the sea

The family of Fred was fascinated by the sea, the father and sons were avid sailors. The passion for boats inspired the brand collections. The exhibition in Paris features the Force 10 collection were the jewels imitate the sailing cables closed with the gold rivets. The signature bracelet designed for men and women is very popular among sportsmen. The Force 10 on the Beaufort scale to measure wind speed means storm. Thus the jewels from the collection symbolize courage, strength of character and indestructible love.

Since the beginning of his career, Fred was interested in charms, the small jewel pieces looking like pendants which are attached to the bracelets. Still very popular today, they’re meant to be personal reminders of important people and events in people’s life. There is no rules how many you can attach to your bracelet, they’re all about the memory of precious things in life of their owner.

In the exhibition we see few charms created by Maison Fred such as Eiffel Tower charm, Arc de Triomphe or small animals. You will also find animal inspired brooches made of precious stones which were one of my most favorite pieces in the entire exhibition.

The first boutique of Maison Fred was situated at 6 rue Royale in Paris, however along with his sons he appeared to be a true visionary in advertising. During the golden era of transatlantic cruises he advertised his brand in newspapers directed and rich passengers of the ships. In result he gained international recognition and became popular among American customers. Later on when the air travel developed Fred opened his boutique in Orly airport in Paris in 1962, he was even selling his jewels on board of Concorde planes.

The sons of Fred Samuel took the brand even further opening boutiques in Beverly Hills, New York, Houston and Dallas, they also expanded to Asia with locations in chic Tokyo’s neighbourhood Ginza, in China in Beijing, and Shanghai, later on in Singapore, Seoul and Dubai in order to strengthen the relations with customers from the Middle East.

The designs got even more popular when the celebrities from the worlds of the cinema, arts and music started wearing Fred jewels. Marlene Dietrich, Grace Kelly, Catherine Deneuve, Johnny Halliday and many other known personalities were keen to wear pieces from Fred. Some of the jewels you can even see in Hollywood movies such as a ruby and diamond necklace which is worn by Julia Roberts in a movie Pretty Woman. The characteristic Star necklace can be seen in iconic 2006 Casino Royale. The piece is worn by actress Caterina Murino. On the exhibition you can see many jewels worn by models, royal family of Monaco and also on many covers of fashion and lifestyle modern magazines.

The crown on Nepal

The exhibition features a fascinating documentary about the tight relation of Maison Fred and the royal family of Nepal. The young king Birendra Bir Bikram Shah Dev and his wife Aishwarya Rajya Lakshmi Devi Shah were coronated in 1975. The tiara and the crown are family heirlooms but the earrings and the diamond necklace are creations of Fred, in fact the French brand was official jeweller of the family since 15 years. The royal couple was placing regular orders, sometimes just to transform some of the Crown jewels, the other times to create completely new pieces. Three generations of jewellers were serving three generations of Nepalese sovereigns for almost 40 years. In the movie we see copies of correspondence between Fred and the royal family, learn about the creative process of designing the pieces as well as personal recollections of some of Fred representatives who actually met Nepalese royal family during the fittings of the jewels. In the exhibition there are sketches of the actual pieces which were sold to the royal couple, the actual jewels sadly disappeared after the collapse of the Nepalese monarchy.

The rest part of the exhibition displays various jewelry pieces showcasing Fred Samuel’s expertise in coloured stones, passion for the sea, various collaborations with celebrities as well as creating objects beyond the jewelry such as evening bags or cushion boxes all incrusted with precious stones.