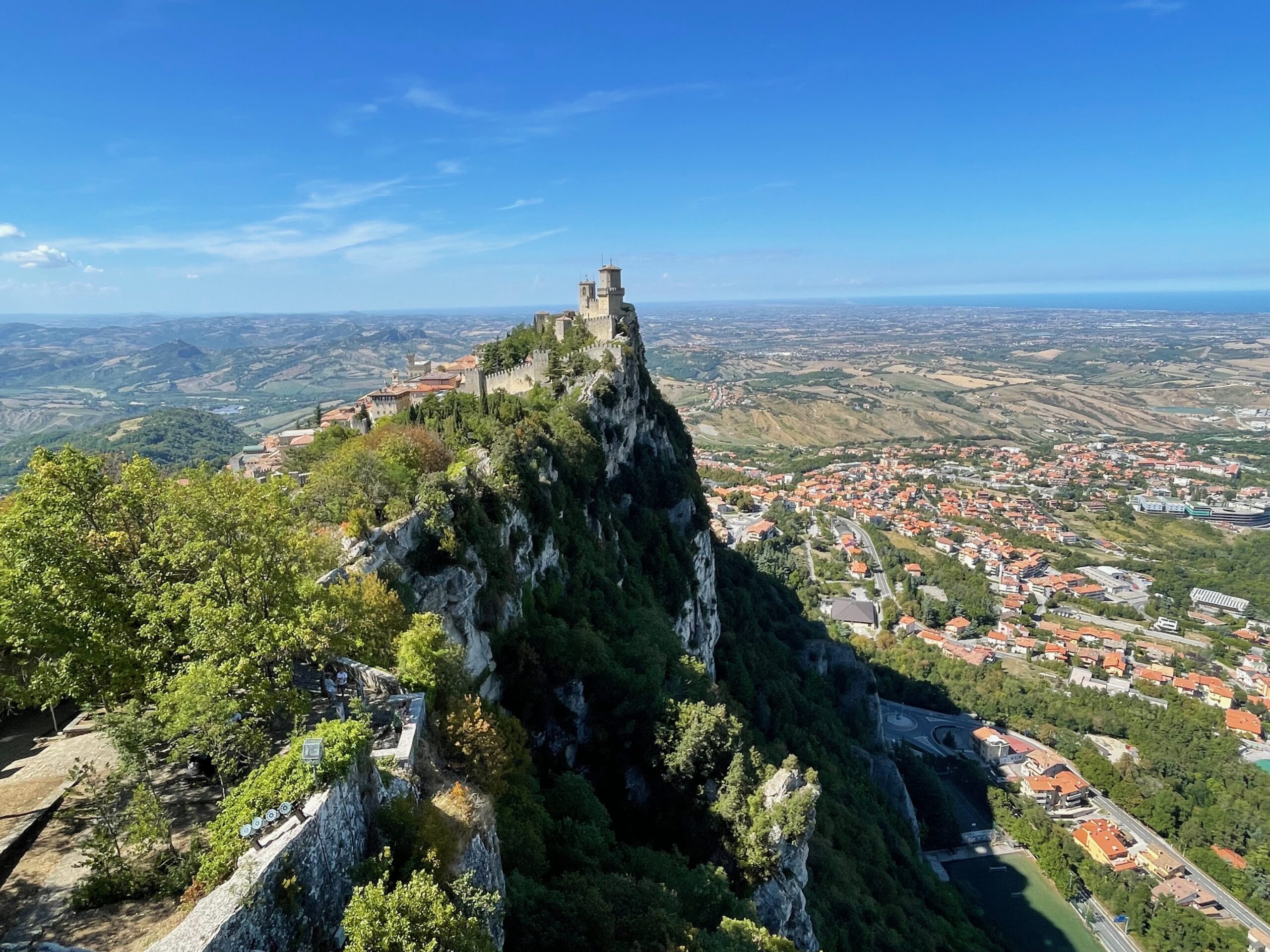 This summer when travelling to Bologna and the surrounding Emilia-Romagna region, we have decided to visit the 5-th smallest country in the world (based on surface)– San Marino.

The capital is charmingly located on the hill of the mountain called Monte Titano and has breathtaking views at the Adriatic Sea and the Apennine Mountains.

Interestingly, San Marino is the oldest republic in the world, being founded on 3rd of September 301, so more than 17 centuries ago!

Not only the oldest and 5th smallest, San Marino is also one of the richest countries in the world, its key industries are banking and electronics, one of the important income sources is also tourism.

How to get to San Marino

San Marino is completely landlocked by Italy, and it’s easily reached from Emilia-Romagna region. If you want to arrive there using public transport, the best way is to take a public bus from Rimini, it takes slightly less than one hour to reach the top of Monte Titano where the capital is. San Marino is not a member of European Union, however there is no border check or no visa required to visit this small state.

We decided to spend one day in San Marino, taking a bus from Rimini. Note that San Marino doesn’t have airport or rails so coming by road is the only way to enter the country.

When planning our trip I read about search of some Tobacco shops to get the bus ticket, however in summer 2022, there was a comfortable office in the railway station in Rimini where one could buy tickets and get the daily schedule of the buses.

Interestingly, the tickets are sold without time and day indicated so you can use it on any day and hour. This is very convenient if you want to keep your holidays flexible, on the other hand, some of the buses can be very crowded, especially morning buses to San Marino and the last bus to Rimini.

We have visited the capital which is the last station of the bus. You can get off at earlier stations, however most of areas looked rather residential, only once I was tempted to get off the bus to visit the flea market we were passing by 😉

The capital is a charming small medieval town with narrow streets and small stone houses, you clearly see that the town was once well-guarded fortress with defensive towers (from 11th and 13th century) nowadays being a tourist attraction.

From all around the city you can admire views at the nearby mountains and the sea and the it’s easy to feel in San Marino like in a fairy tale.

One full day is enough to have a stroll around the city and visiting its main attractions. I suggest starting with the tourist office to get there a map so you can smartly navigate between sights you want to see. If you want to officially mark your visit, for 5 euro you can get a stamp in your passport.

We have started our walk with Basilica of Saint Marinus which was built in 19th century on the foundations of Romanesque church. The entrance is free and it’s a nice good place to rest a bit in a shadow if you’re coming there in the hot summer days.

One of main attractions of San Marino capital are the towers. From the church it’s convenient to go to the First Tower (Guaita) which was erected in 11th century and restored in various later periods. Some of rooms were once used as a prison. Close to the entrance you will find the Rocca chapel dedicated to Santa Barbara. You can climb on the small terrace of the tower from where you have amazing views at the area. However, the ladder is not very much friendly for people wearing flip flops or high heels, it can be also difficult if you travel with big backpack. If this is your case, don’t worry, there viewpoints in the second tower will be much easier accessible.

There is the entrance fee to the towers, and I really recommend to buy a combined ticket to two towers and Public Palace, the price was 7 euro.

We have directed our next steps to the Second Tower (Cesta), which is a pleasant walk along the hill with amazing views at both the capital and the Adriatic Sea.  The Second Tower stands on the highest peak of Mount Titano at 755 meters.

On the way you will find many stands with refreshments and small restaurants with tables having stunning views at the area. For one of the richest countries in the world, the prices of food and souvenirs very surprisingly low, the same as in Italy and in case of certain products (about this later) significantly lower than in Italy.

We have stopped for seafood pasta and risotto and glass of local wine in one of the small restaurants, I also looked at the leather travel bags on one of the many stands along the road to Cesta. The bags were very well priced, however impractical for travelling by public transport, especially planes.

The panoramic road to the Second Tower is absolutely breathtaking with spectacular views of the surrounding nature. The path connects the three ancient towers of San Marino on the edge of the mount. Since the middle of 20th century the tower hosts the Museum of Ancient Weapons where about 700 weapons of various types and many periods are exhibited. In the day of our visit, the museum was closed, however we walked around the walls of the tower and climb few terraces to admire panoramic views of the sea and Apennines, in my opinion in Cesta you have the best viewpoints in entire San Marino capital.

Nearby the exit from the Second Tower, there is a small path leading to the forest. A short walk in the shadow of trees gets you to the tower Terza Torre–Montale, which is not open to public but it’s a pleasant walk to get there, plus this tower is the least touristy. If you want to cool down a bit and have a quiet stroll in the forest, I recommend to take a look. It won’t take more than 20 minutes, even if when looking at Terza Torre from Cesta, the distance looks bigger.

The last site we have visited was the Public Palace which is the seat of the highest governmental  institution in San Marino. In fact, I suggest starting your itinerary with the palace and then head to the towers. In the event of official ceremonies or sessions of the Parliament the palace can be closed to the public so it’s better to check the opening hours in the day of your stay  and adjust your visit appropriately.

When there is no sessions in the Public Palace, you have access to two floors, on the second floor there is a room where the sessions of Parliament are held. From the palace’s windows you can admire the stunning views at San Marino and Italian Apennine Mountains. Maybe it’s naïve of me to think that, but I would suppose such views must be inspiring to make honest and noble decisions for the wellbeing of the country by politicians who overlook such natural beauty during their gatherings.

The rest of our stay we spent on wondering around, strolling through small medieval streets filled with small restaurants and shops. The prices of souvenirs were very low, especially the food specialties. Unsurprisingly, San Marino cuisine resembles very closely the Italian one, with few special dishes typical just for the country, we found out 3 desserts getting their names from San Marino capital peaks of Mount Titano.  One of them is Torta tre monti that is considered to be the national dessert of San Marino. It is named for one of its peaks that the tiny county is famous for. The cake consists of multiple layers of wafers joined with hazelnut cream and/or chocolate. Another traditional dessert is Verretta  which is  a chocolate-covered wafer cake with  layers of crispy wafers and cocoa cream for a base. The filling consists of hazelnuts, wafers, and soft cocoa cream. The third dessert to try is Bustrengo which is popular especially in Christmas period.  This sweet is a traditional fruit cake originating from San Marino, although it is also popular in Bologna. It consists of cornmeal, flour, stale bread or breadcrumbs, eggs, olive oil, milk, honey, apples, figs, raisins, and zest of oranges and lemons.

San Marino produces also its own Limoncello, delicious liquor made of local lemons. If you search for less sweet drink, than try Amaro which is herbal liqueur often consumed in Italy  as an after-dinner digestif. We also found in one of the shops very good grappa, grape-based pomace brandy of Italian origin that contains 35 to 60 percent alcohol by volume. The prices in the San Marino supermarkets and specialty shops were much lower than in Italy in local shops so if you plan to get a bottle of some of the drinks, I really recommend to do it in San Marino, the quality was not compromised and our grappa and limoncello were really very good.

Another great discovery was prices of tartufatas, famous Modena balsamic oil (better prices than in Modena!), hams and local cheese. If you plan to stock and bring back some delicacies of Emilia-Romagna home, it’s quite profitable to do it in San Marino rather than in Italian towns.

Similarly as with foods, San Marino has very good prices for other goods like leather products–leather bags, backpacks or travel luggage; glass and porcelain, we also saw huge interest in shops selling different types of arches and hunting equipment, however I can’t comment on offer of the latter, since I don’t have much knowledge about it.

Nonetheless, it’s quite clear that most of the products have more attractive prices than in Italy and it’s a very good place to buy your souvenirs from the visit of the region.