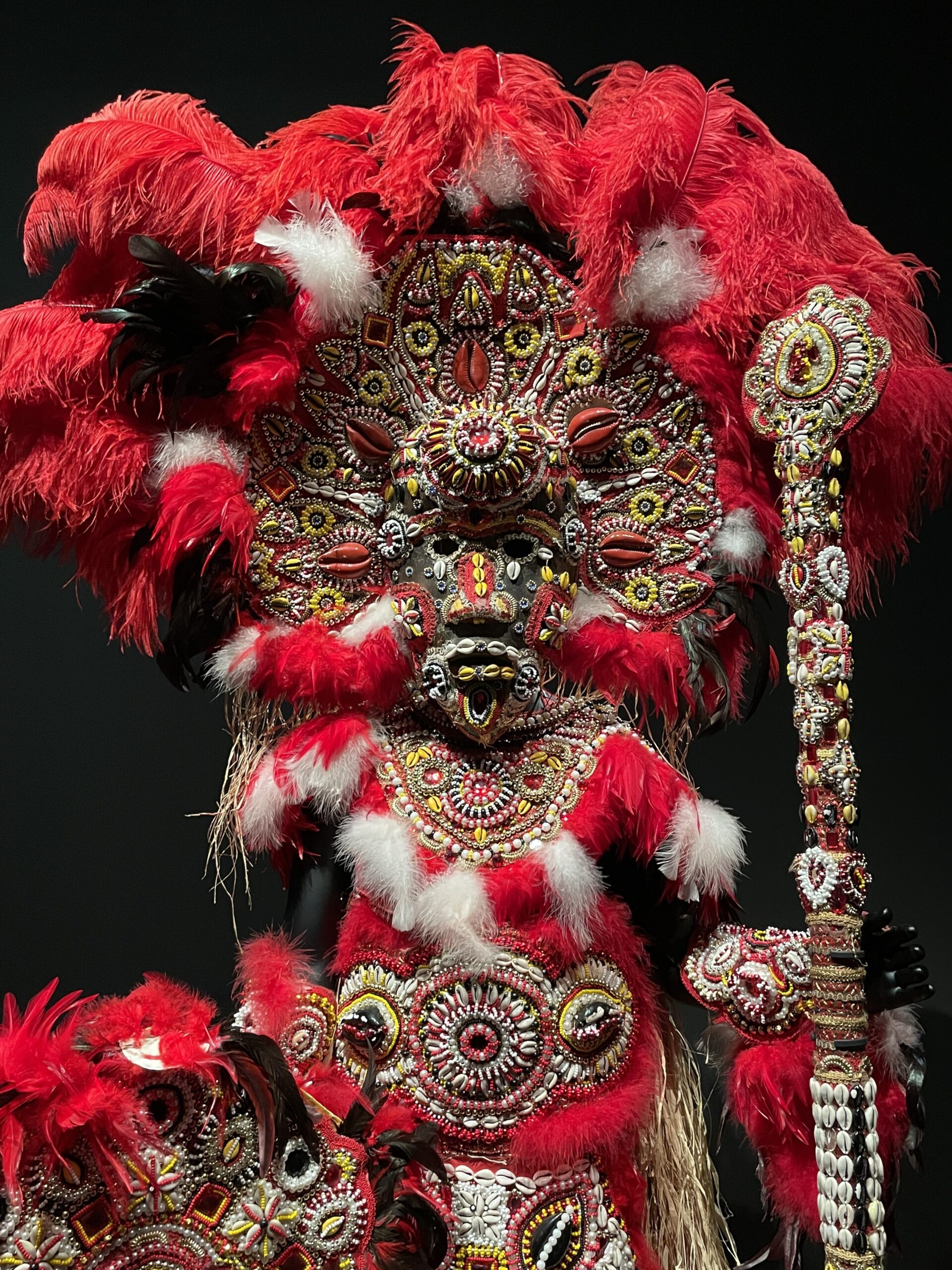 The exhibition Black Indians from New Orleans in the Musée du quai Branly in Paris reveals a story of Black Indian communities in Louisiana state. Through the exhibition we learn how this ethnic group  functioned under French, Spanish and American domination for centuries. The key way to understand Black Americans is to the learn the cruel story how they were (and sadly often still are) experiencing crime, inequality, isolation and poverty and how the developed sense of community through the common traditions and cultural heritage that allowed them to preserve their identity.

In this post I’ll write about a painful history of colonialism and slavery as well as turbulent beginnings of the United States. The exhibition presented at the museum delivered a mass of documents, pictures and testimonies describing the cruel schemes started with a European expeditions to Americas from the 17th century onwards. The isolation and segregation of the society based on colour has been well present in the United States until 1964. This exhibition helps the modern society to not to stay indifferent as well as  remain compassionate and sensible towards minorities and different ethnicities. I also think it helps to understand different processes that go through our communities since only comprehensive considerate actions can help us tackle so many problems our societies are faced with.

The exhibition celebrates the cultural and artistic creativity of African-Americans in New Orleans, the most spectacular form of it being the Black Indians carnival parade. Behind the dazzling costumes of beads and feathers, lies a story of violence and resilience. Black Indians from New Orleans takes us also on a difficult geographical and historical journey: from the beginnings of a European presence in Louisiana up to today.

Violence exists in every critical moment in African-Americans’ Louisianian history: the violence of capture and uprooting, the crossing and landing in New Orleans, slavery, the Civil War, segregation, and racism. To this day, violence induces resistance strategies, as well as gives rise to social reorganisation, and cultural and artistic creative processes.

In response to these serial assaults on body and mind, resilience attests to African-Americans’ ability to rebuild themselves culturally and arm themselves with tools for material, spiritual, and symbolic development in the face of adversity, oppression and the loss of freedom, identity and security. Highly active community Social Aid and Pleasure Clubs, founded in the 19th century, the invention of new dance forms and musical expressions such as bamboula, jazz and blues, or the Black Indians’ spectacular parades are all significant evidence of this.

Native Americans from the region were the first to experience the brutality of European colonial expansion and the torments of war, raids, capture, and enslavement. Such violence began with intrusions from English adventurers who settled in New England in the first half of the 17th century. From the foundation of New Orleans, on 25 August 1718 the trade of African slaves was initiated. The process was introduced due to the insufficient numbers of local workers. The newly arrived Africans experienced the same oppressive treatment as Native Americans. The common fate and exploitative work those two groups were subjected to  made them to develop lasting and respectful ties. Throughout the 19th century, the Native American world,  lifestyle, and some of their beliefs and values as well as an attire served as an inspiration to the very first Black masking Indians.

In 1756 the Seven Years’ was between France and Great Britain has started. The conflict tore apart Europe and impacted the situation on the North-American continent. At the end of the war the Treaty of Paris has beed signed with the Lands West of the Mississippi River being ceded to the Spanish. The freedom movements reached the critical point and resulted in the French Revolution (1789) and the start of the Haitian Revolution (1791). The violent events induced the end of French imperialist ambitions in North America. The concession of New France to Great Britain gave a rise to new conflict between the two countries on the American land. The was ended with a peace treaty was signed in 1766. However, this was far from the end of turbulent times for the troubled continent. in 1775 the American War of Independence against Great Britain has started in the 13 American colonies. The American Revolution has established the United States with its numerous civil liberties and set an example to overthrow both monarchy and colonial governments. However, the end of this war didn’t give the rights to Native-American to their ancestral land.

Starting at the end of the last decade 18th century, the first successful slave revolt in the French colony of Saint-Domingue was extraordinary in many respects; its major achievement being the foundation of the Republic of Haiti in 1804. France’s failure to suppress this revolution, coupled with the prospect of another conflict the United Kingdom, prompted Napoleon to sell Louisiana to the United States. Acquisition of Louisiana  was proposed to President Thomas Jefferson and transaction has been made in 1803.

Under American administration in 1804, the organisation of French society in the Caribbean and New Orleans dividing the inhabitants into free categories – White people, people of colour and Black slaves – disappeared. Black or dark skin automatically implied the status of slave or individual to be “controlled”. The general conviction was that Black people were “naturally” better able than Whites to do hard physical work in the hot climate. Black workers were thus necessary to maintain profitable businesses of goods production. The system preserved the oppressive relation between slave and master relying on the practice of physical violence by the master and his absolute agency over the slave’s body, which in response induced innumerable acts of resistance and resilience strategies by the workers.

In 1861-1865 the civil war between northern US states led by Abraham Lincoln (who wanted to abolish slavery) and the southern part of the country had place. The civil war had been devastating for the South and killed nearly 620 000 soldiers in both camps. In 1865 the slavery was abolished but unfortunately the new law did not end the basic mechanism behind the slavery economy. The new scheme was developed a new way exploit workforce without restriction. The 13th Amendment which banned the slavery allowed simultaneously servitude for convicted prisoners. This paved the way to legal procedure  to accuse, convict, and lease out tens of thousands of mento farms, mines, or road and railway construction. The cheap labour of prisoners was demanded in order to speed up reconstruction of the region after devastating civil war. Most of workers were African- Americans, sentenced to prison for petty offences such as spitting on the ground, not giving way to a White person, or being out of work.

The prisoners were leased which was a cheaper scheme than the slavery, with costs being significantly reduced since the healthcare and  accommodation didn’t have to be provided. Torture and abuse were everyday practice which resulted in death of thousands of individuals. Interestingly, although these practices were discontinued during the 20th century, the 13th Amendment, still in force, permits forced labour in most federal prisons.

Following years didn’t bring much progress for the situation of Black Indians. All hopes and expectations of equality and social justice following the end of civil war and  held by four million enslaved people were in vain as in Southern states measures aiming to re-establish African-American’s  exploitation were introduced. In 1877, Jim Crow laws applying segregation came into force in the majority of Southern states. They imposed segregation in gathering places and public services and facilitated delivery of  significant workforce for reconstruction. This gave access of wealthy owners of  plantations and industries to cheap labor via creating underpaid pseudo-jobs to thousands of emancipated but unemployed African-Americans.

The new law lead to segregation in schools, hospitals, public transport, restaurants, parks extending to practically all public places. Residential segregation pushed African-Americans to the poorest neighbourhoods, most of them below sea level, making them vulnerable to devastating hurricanes. From the 1950s to 1964, New Orleans was a centre of a struggle for Civil Rights. Many non-violent actions such as equality marches, store boycotts, and sit-ins at segregated lunch counters had  place to protest against violation of civil rights.

The African-American communities developed their own traditions and festivities to have a significant moment together to shield from constant oppressions and violence. African-American artistic and carnival traditions developed in a tense social context during the Jim Crow era, under enormous pressure of systemic racism. Functioning as second-class individuals and banned from official public events, Black people  invented their own parallel celebrations, due to the same religious calendar based around Easter. The events were designed as an act of defiance. Thus, they manifested against their vulnerable condition through costumes, dance, and song.

The abolishment of segregation laws in the second half o 20th century did not put the end of the struggles of African-Americans. Hurricane Katrina, in 2005, revealed again the structural ongoing social problems in New Orleans. The local and federal government responses to this natural disaster showed that the city’s social and racial segregation as well as in the entire country’s still are in place.  A few hours after the strong storm hit, when it seemed the worst had passed, the poorly-maintained flood-defence system protecting the city collapsed in several locations and took in the water, forced by the winds. The Black majority neighbourhoods were flooded. Waves crashed and covered residents and their houses under two to three metres of water.

The exhibition makes an interesting point that the decline in welfare programmes and infrastructure spending by successive US administrations during last years resulted in significant  worse conditions of the most vulnerable communities. The old well-known belief that the country is the land of opportunities is still prevalent in the United States. People are led to believe that it is up to individuals to be successful in life and one has to take care of themselves. This point of view, ingrained firmly in the American psyche, is a serious barrier to support the most vulnerable, including many of African-Americans, and can make the pursuit of the “American dream” into a nightmare for many.

The recent tragic death of George Floyd has once again revealed to American nation and the rest of the world that the structural problems of African-Americans do not belong to the past.  A Black Lifes Matter movement that followed this terrifying incident seeks to oppose the racism, discrimination, and racial inequality experienced by Black people until now. The Unite the Right rally in Charlottesville in 2017, where participants gathered white supremacists, nationalists and militias who chanted “You will not replace us!” only prove the sad point that the discrimination of African-Americans is still systematic.

The good point is, that we can learn and speak about it. The more of us knows the story of those communities, hopefully the more of us will approach these systemic problems with more consideration and sensibility.

This post was created using materials and information presented at the exhibition Black Indians from New Orleans in the Musée du quai Branly in Paris. Check out the museum’s website to book your visit and see this exhibition as well as the permanent exhibitions.