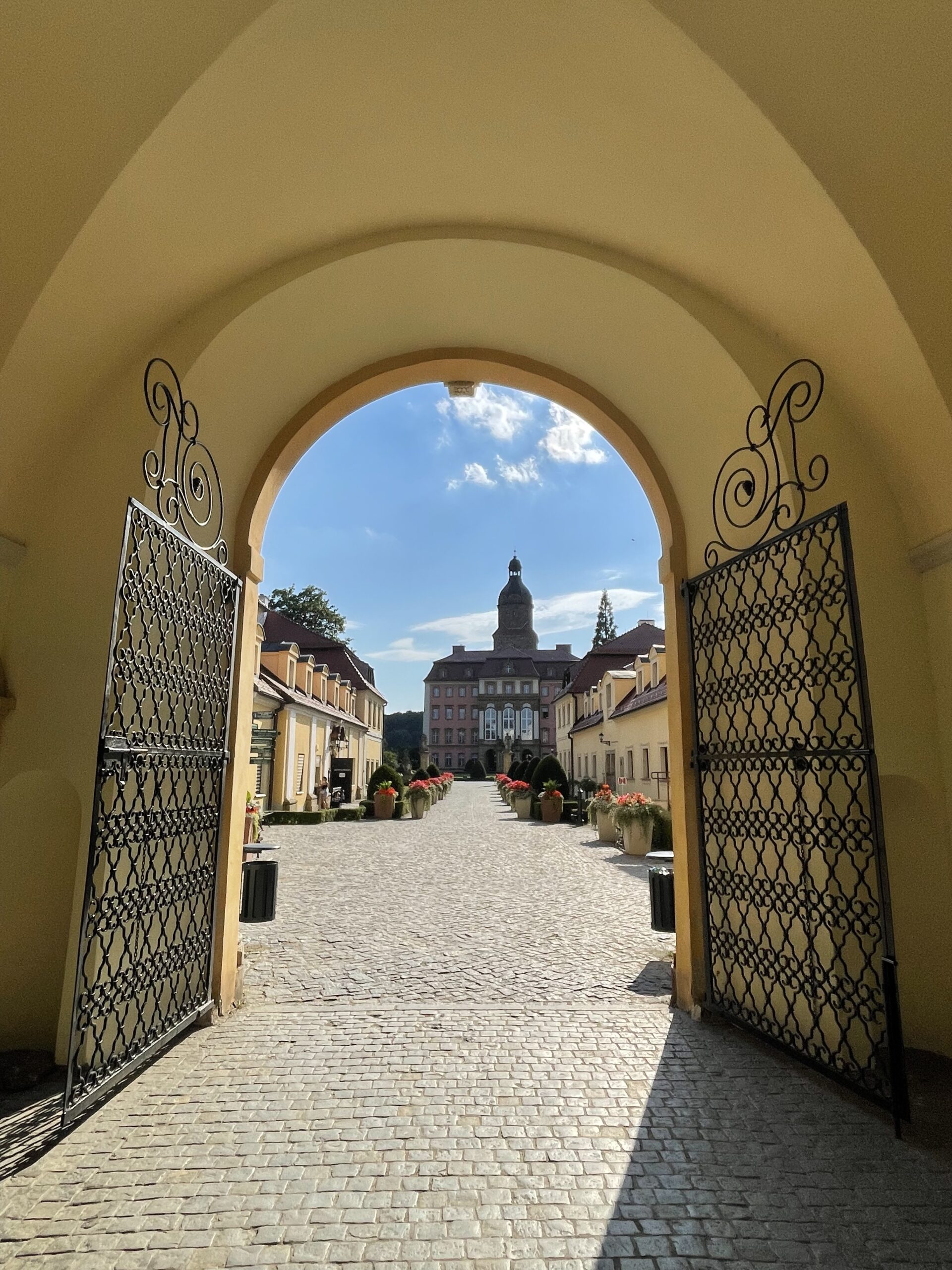 Last summer I have visited fairy Książ Castle which is an impressive palace complex in Lower Silesia region. The castle is third biggest object of this type in Poland after Wawel Castle and Malbork Castle which are also worth visiting.

The castle stuns with its lavish interiors and the fairy surroundings, the palace is located on the hill, from the windows of the grand rooms you see gentle mounts covered in forests, mysterious valleys and well manicured gardens attached to the residence. All those grounds belong to Książ estate which is so vast that you don’t even see nearby roads and neighbouring towns which amplifies the feeling of being transferred straight into the beginning of 20th century when the most famous resident of the castle, Princess Daisy von Pless lived.

Before I give you short story of the castle and few facts from fascinating  life of Princess Daisy, I provide you with some practical information if you plan to visit.

The first mention of the castle had place in the end of 13th century. The castle had a defensive function and belonged to Bolko I “the Strict”, Prince of Świdnica and Jawor. The fortress was known as  “Książęca Góra” or “The Prince’s Heights”. The building was erected on the hill which ensured its advantageous strategic militarily position but also distinguished it among other objects of this type due to its picturesque surroundings in the heart of the forest. Bolko I held the title “Lord of Książ,” which was passed to his successors. After the extinction of Piasts dynasty from the Świdnica-Jawor line, the castle was passed to the Czech kings from the Luxembourg dynasty at the end of 14th century. The premises  had many owners through the centuries until at the beginning of the 16th century they became the property of Hochberg family and remained in their hands until 1944. The Hochberg family built their wealth and reputation due to the ownership of large estates and coal mines in Silesia. The business  brought the family enormous fortune and made them one of the richest family in entire Europe. They made Książ Castle their main representative residence and rebuilt it in a lavish renaissance style.

The Hochberg Family and Daisy’s diaries

The most known owners of the castle was Hans Heinrich XV von Hochberg who was a Prince of Pless and his British wife Mary Theresa Olivia Hochberg von Pless, better known as Princess Daisy. During the time when the couple inhabited the premises, Hochbergs were one of the wealthiest and most significant families and Europe. Prince of Pless gained even more international connections due to the marriage with Daisy who came from one of the most noble but impoverished British families.  Thanks to connections of Daisy, Książ became visited by the kings and queens, princes ands princesses and many other guests from the circles of the highest European nobility. Thanks to the diary Daisy was writing through years of marriage with Hans Heinrich XV (she was writing  it during 25 years) we learn how life of the wealthy aristocratic family looked like. We can read how lavish lifestyle the upper levels of society had in Europe in 19th and first decade of 20th century.

Pless family lead the typical extravagant life of European wealthy nobility. Reading Daisy’s notes one can notice a certain routine of the couple formed through the years. They were spending their winter in the court in Berlin, travelled to the French Riviera for spring and from May to August resided in London to take part in balls, races and sailing regattas in Cowes. In the autumn the couple hosted their distinguished guests for hunting season after which they travelled to their second residence (where her in laws lived) for Christmas. Despite so busy schedule and frequent absence from home, Daisy was engaged in many charity initiatives in the region trying to improve the safety and living conditions of people from local villages who mostly worked in the mines owned by Hochbergs.

The Princess did not receive extensive education neither pretended to be intellectual, thus her notes contain spontaneous comments and reflections on events (those we know from history as well as from domestic life of a privileged family) and people of her time which gives an interesting insight into the era in which Daisy lived (which was a very tense political period before WWI and the twilight of a lavish life of many wealthy European dynasties).

If you want to learn more about life of Hochberg family and Princess Daisy in particular, I recommend you reading the book: Better Left Unsaid (From My Private Diaries) by Daisy Princess of Pless which is a compilation of letters, documents and diary entries selected by Daisy. If you’re Polish reader, you can have an excellent translation of Barbara Borkowy (Lepiej przemilczeć. Prywatne pamiętniki Księżnej Daisy von Pless z lat 1895-1914).

End of the WWI brought many geopolitical changes. Książ Castle and the surroundings mines became part of Poland and Pless family lost big part of their fortune. During the WWII, the premises were seized by the Nazi regime and the mysterious project Riese was developed here between 1943 and 1945. It consisted of the underground structure of unknown until now purpose since the documentation was destroyed by Germans when withdrawing from the region. Part of the tunnels are possible to visit today (you need to choose the ticket fare including the corridors).

After the WWII the castle was left unattended, its condition worsening and the premises being robbed by impoverished locals. Only starting from 1956 the were  securized from the further devastation. In 2005 the castle undergone an extensive renovation and the estate became open to visitors.