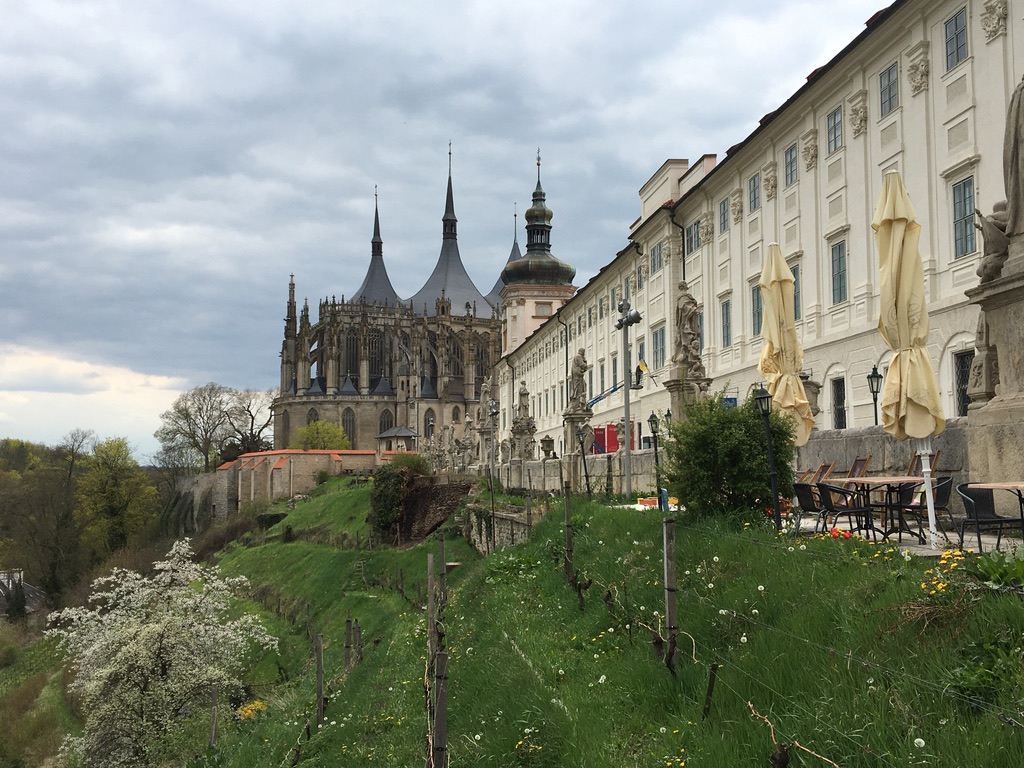 I have visited Kutna Hora as a convenient one day trip from Prague, capital of Czech Republic. Since I had spent few intense days in Prague I was curious how looks the rest of the country. Kutna Hora tempted me because of its distinctive history, its UNESCO status and famous Sedlec Ossuary.

Kutna Hora can be reached from Prague by train, there is plenty of trains running through the day and the one-way journey takes around 90 minutes. Alternatively, you can rent a car and get to the region even faster.

Relaxed day away from Prague

The itinerary I present is a relaxed one, well suited for a slow pace one day visit. The main focus was to visit 3 most famous churches in the region and then explore the old town of Kutna Hora without rush. When planning our trip we have seen a lot of very packed schedules with people rushing on a bike to switch between many sites. In this itinerary the focus is to visit the area without quick pace, you can see all the places on foot, find time to slowly enjoy your refreshments, stop and take in beautiful places, vineyards and the green surroundings.

The history of Kutna Hora and its surroundings is inseparately linked to silver mining. Initially established as a silver camp, in the second half of the 13th century, it soon became a Royal Town prestigious to the point that it even competed with Prague. Since 1961, Kutna Hora has been a part of the National Heritage List, since 1995 it has been the only town with the UNESCO status in the middle Bohemian Region.

When you plan your Kutna visit, don’t miss a nearby village Sedlec (its 40 minutes walk from Kutna Hora or 5 minutes local train which is fun on its own since the vehicle is very vintage). In Sedlec you will find a peculiar chapel filled with bones and human skulls. The characteristic church was built at the end of 14th century in gothic style and has a chapel upstairs and an ossuary downstairs. According to the legend, in 1278 the Sedlec cemetery was blessed by a sprinkling of soil brought by abbot Heidenreich from Jerusalem. Thus, the cemetery became the oldest “Holy Field” in Central Europe and a popular burial ground. After 1318, the cemetery was greatly expanded due to famine and plague epidemics. Documentary evidence shows that at this time more than 30 000 people were buried here. In the early 15th century, during the Hussite wars, about another 10 000 people were buried here at the cemetery.

At the end of the 15th century, the cemetery surface was reduced. The exhumed bone remains of about 60 000 people were deposited in the downstairs chapel of the church, where they were collectively decoratively grouped as early as in the 16th century. According to the legend, in 1511, the bones were arranged into six large pyramids by a partly blind Sedlec monk. In the 19th century, the church underwent a major renovation including renovation of bone decorations. The works were carried out by a carver Frantisek Rint who disinfected the bones with chlorinated lime and composed additional bone decorations including the bone chandelier which is in the central part of the chapel.

If you want to elevate your experience of the chapel you can book a nighttime tour of the ossuary which is illuminated by a candlelight and accompanied by organ music. The visit is guided by a Cistercian monk or nun in traditional robes.

I have visited this chapel in the day and I was under big impression even without extra nighttime special effects. But I guess that late evening visit may feel more spiritual if that’s what you’re looking for.

When you’re already in Sedlec, it’s worth to have a short visit in the Cathedral of Our Lady of the Assumption and St. John the Baptist.

The Cathedral of our Lady of the Assumption and St John the Baptist is classified as a UNESCO Heritage World Site. Originally, the cathedral was part of the oldest Cistercian abbey in Bohemia, established in 1142.

The cathedral was built between 1290 and 1320, during a period of the Cistercian monastery’s economic growth which was generated by silver mining. This cathedral was the largest sacred building in Bohemia and Moravia regions at this time. In later years the cathedral was plundered and burned down by Hussite army, for many years remaining in complete ruin.  In the late 17th and 18th centuries, the Cistercian Order had the cathedral reconstructed on the High Baroque Style (Baroque Gothic) by the brilliant architect Jan Blazej Santini-Aichel.  The architect used for the first time the construction features that are unique in the world: a self-supporting vault called “Bohemian vault” and self-supporting spiral staircase.

In 18th century were hard again for the cathedral, the Sedlec monastery was dissolved and the church became a store-house for flour. At the beginning of 19th century the buildings were turned into tobacco factory which still operates there today.

The cathedral began to be used again for religious purposes in 1806 and was registered in UNESCO World Heritage list in 1995.

You can get from Sedlec to Kutna Hora on foot (comfortable road) in around 45 minutes, alternatively you can take a local bus or a bike. I would opt for a walk since the bus is a slow one going around through many suburbs.

We directed our first steps to St Barbara’s Cathedral. I suggest starting with the church so you won’t skip the opening hours and then be completely flexible with the rest of your explorations.

St Barbara’s Cathedral is a UNESCO World Heritage Site and is a unique work of peak and late Gothic architecture. Its construction started in 1388 and after several interruptions completed after 500 years of building, in 1905. In some chapels late Gothic murals with mining themes are preserved, the most prized can be found in Smisek’s Chapel.

The cathedral is oriented from the west to east with the intention that the space is supposed to take in both the first and the last rays of the sun. A person coming through the main entrance is symbolically going out of the dark into the light, which is the resurrected Christ.

From the main entrance you have a splendid view at the main altar with a central theme being a Last Supper. Main altar is surrounded by 8 apse chapels around the chancel which a typical feature of gothic cathedrals.

When visiting the cathedral don’t miss the inner galleries upstairs. You will find the stairs close to the main entrance. From the balconies you have a splendid view at the interior of cathedral, there is also an exterior terrace from which you can admire surrounding area.

When you’re finished with St Barbara’s Cathedral, I suggest to have a relaxing walk in the old town. Nearby the church you’ll find an impressive building of Jesuit College which is a three-story baroque building which currently hosts Gallery of Central Bohemian Region.

However, the ground floor is free to visit and there is also a cafeteria there so you can pop in and have a look at the interior/have a coffee.

When walking out of the cathedral and going into direction of old town, you will walk through a beautiful Barborska street, which is walking street lined with sculptures depicting the 12 Jesuit saints and Czech patron saint St. Wenceslas, completed in 1716 by sculptor František Baugut. This is one of the most charming places in Kutna Hora, the street is also a kind of terrace from which you can admire local vineyards and beautiful surrounding area full of green vegetation.

When walking along the street you will find a charming restaurant with a terrace from which you can enjoy the aforementioned views. They serve very good local beer (named Kutna Hora of course!) and have Czech cuisine dishes.

I ordered there a seasonal wild garlic soup which was very tasty. This was my favorite place for refreshments in the town and sitting on the terrace you really can have a very relaxing moment sipping your beer and taking in views at Kutna Hora.

After so much of sacral experience in this day, we did not decide to enter more churches and just had a slow walk in the old town. We had seen from outside the Italian Court which is the former residence of kings and the Royal Mint. Wandered around small streets (Ruthardska Street being very picturesque) and looked at Stone House which hosts Czech Museum of Silver, walked around St James Church (which was closed), Plague Column, and visited local squares, stopping by to admire many beautiful facades of buildings.

After small glass of another Czech beer, we slowly headed to train station to get back to Prague.

Practical tip: The station is very local and small so there is no ticket machine available. The best way is to just get your ticket online. Alternatively, you can purchase it at the train (but not sure if there is an extra charge for that or not). During our visit they had some problem with payment by card in the train and accepted only cash so consider buying return ticket in Prague or opt for an online purchase.

There is plenty of trains back to Prague, but I recommend to check website of Czech railways to make sure you won’t skip last connections. For schedules click here .