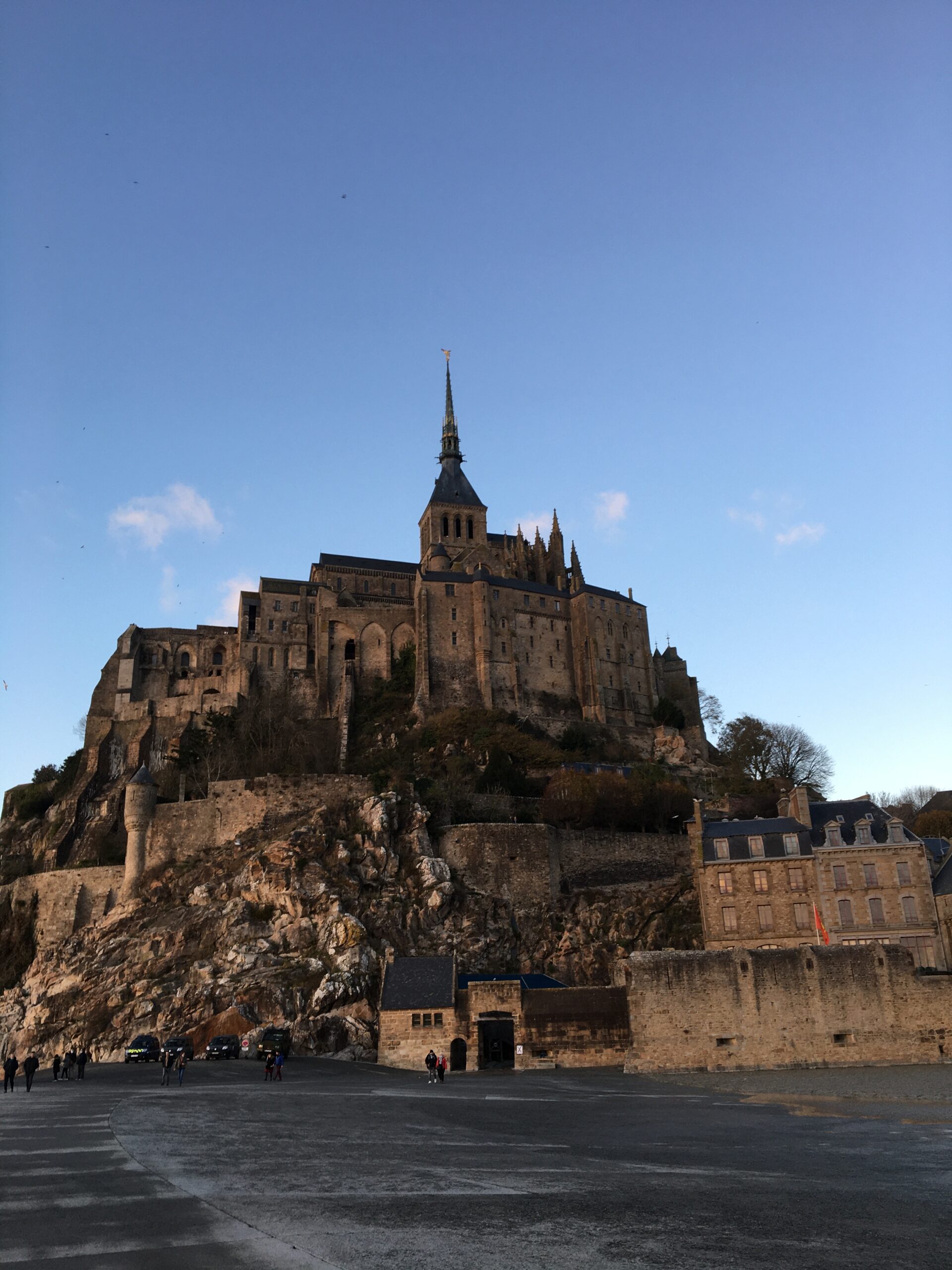 I visited famous Mont Saint Michel in the second half of November as a part of a short visit to Bretagne and Normandie. Whereas most tourist guides advice to come here in the summer months since the weather can be whimsical (think cold, rainy and windy) in western and northern parts of France, arriving here outside of the season definitely has its advantages–less tourists, feeling that you have the island just for yourself and a very special, somewhat mysterious aura of old monastery–enhanced probably by fog and whistle of wind running through narrow cobbled streets of the village surrounding the abbey situated just on the top of the mountain.

Mont Saint Michel and its Bay with its stunning natural surroundings and exceptional architectural construction, is the first side in France classified as World Heritage UNESCO in 1979. The monastery and the attached village are on the island which is partially separated from land during high tide. Due to the significant tidal movements in this region (over 10 meters) a large part of the bay is uncovered at low tide. This unusual location of the monastery made it a defensive fortress in the history, the side was also an important centre for spirituality, in 1998 it was announced as a ‘pilgrimage route to Santiago de Compostela in France’.

Mont Saint Michel is one of the most visited destinations in France,  there is plenty of organised one day trips from Paris (you can also rent a car–it’s approximately 4–5 hours drive) or more conveniently, come for 2 days to Bretagne and visit Rennes or Saint Malo. From each of the cities you can reach the monastery by bus or by car (only one hour drive).

The village of Mont Saint Michel is full of charming small cobbled streets with a medieval vibe. Most of attractions are concentrated around Grand Rue were most shops, restaurants and bars are located. Don’t skip the parish church of Saint-Pierre, surrounded by a cemetery (where La Mère Poulard herself, Anne Boutiaut, lays to rest) and where a silver statue dedicated to Saint–Michel is located.

Small narrow streets leading up from Grand Rue take you to many small hotels located on the hills. A little bit above the hotels there are small terraces where you can enjoy the view and sit on the bench and have your picnic.

Many small paths (on the right side of Grand Rue when climbing up) lead to the old walls which once protected the island, nowadays you can have a stroll along the walls and enjoy spectacular views at the bay and observe amazing game of light and changing colours of the sky–very dynamic effect of sun getting through clouds which is somewhat unique phenomenon for Bretagne and Normandie regions. There are few places where you can stand and enjoy your food, however be aware of seagulls–they can steal your sandwich and even scratch you.

I won’t recommend any restaurants here, however the famous one is L’Auberge de La Mère Poulard, known for its omelettes. The founder, Annette Poulard, fulfilled her dream of opening her inn, La Mère Poulard, at Mont-Saint-Michel in 1888. This very historic restaurant is included in Michelin Guide and hosted many respected and famous guests such as Claude Monet, Pablo Picasso, Ernest Hemingway, Woody Allen,Margaret Thatcher, François Mitterand and many others were dining there.

Another interesting restaurant is Le Pré Salé. I didn’t visit it but the name suggests they may serve salt-meadow lamb (agneau de pré-salé) which is  a type of lamb which was raised in salt marsh meadows of Mont Saint Michel bay covered in halophyte grasses with a high salinity and iodine content which causes the meat to have a distinct taste that is considered a delicacy. The salt-meadow lamb is registered as an Appellation d’origine contrôlée (AOC).

You will find in the village many other small restaurants and bistros, so if you are not visiting Bretagne and Normandie, it is nice opportunity to try local cuisine. Bretagne is famous of its salty pancakes (galettes), if you visit in autumn you can have a galette with scallops (cuquilles Saint-Jacques)–local delicacy. In the region you will also find great variety of very thin sweet pancakes (crêpes), try the ones with salty butter and caramel (crêpes bretonnes au caramel beurre salé). For a some taste of Normandy, you can order Crêpes Normande which can best be described as apple pie inside a crêpe. Bretagne and Normandy are regions known from growing delicious apples and produce French best cider, so make sure you will have a glass or two. In the on Grand Rue you will find famous Normandy sweets

If you are shortly in France, Mont Saint Michel souvenir shops are good places to make a purchase of authentic French products. Small boutiques sell French renown clothing brands like Saint James, Armor Lux or Le Slip Français. You will also find small shops with local handcrafts and Normandien sweets and treats. Surprisingly, I didn’t find the prices very elevated (the same as in online stores).